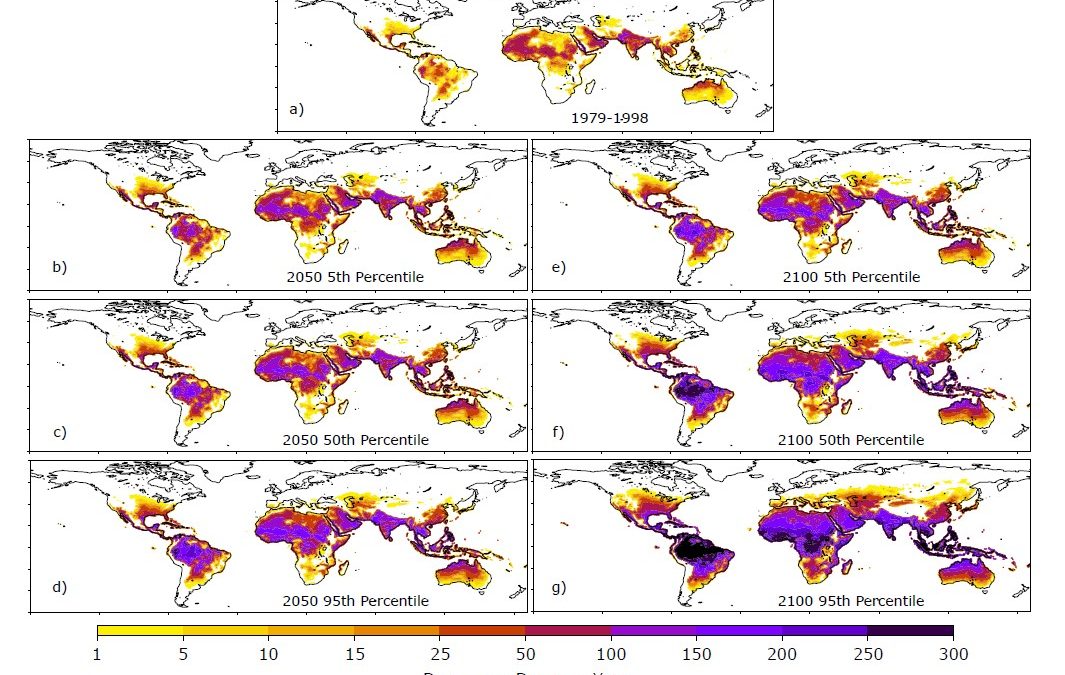 The top map shows the historical record of “dangerously” hot days per year, with a heat index above 39.4°C. The left-hand column reflects the range of dangerously hot days in 2050, with more than 100 “dangerous” days in parts of South America, Africa, India and Australia. The right-hand column shows the wider range of possibilities for 2100. The lower part reflects the worst-case scenario, with dangerous conditions for much of the year in South America, Central Africa and South Asia. Author: Vargas Zeppetello et al./Communications Earth & Environment.

Research estimates that the rise in global average temperatures could approach 2 ˚C by 2050. The study, published in Communications Earth and Environment, estimates that by 2100 many people living in tropical regions will be exposed to dangerously high levels of heat on most days of the year. In addition, deadly heatwaves, which are currently rare in mid-latitudes, could occur every year in these areas.

Contrary to many studies on future estimates of climate variables (such as temperature and precipitation), in which alternative scenarios of greenhouse gas emissions are selected from the outset and no assumptions are made about the greater or lesser likelihood of different scenarios, this paper presents as a starting point a probabilistic scenario of CO2 emissions (as the main greenhouse gas) for mid (2050) and end of century (2100).

These probabilistic projections of CO2 emissions are based on data on population growth, GDP and carbon intensity by country. Using these projections, the authors present a statistical projection of a heat stress index that takes into account both temperature and humidity.

The results of these projections show large areas in tropical regions with a number of days where the index values are dangerous or extremely dangerous to human health. The maps also show important areas in mid-latitudes, including the Iberian Peninsula, affected by a significant number of days with dangerous heat stress.

The authors conclude that, to reverse these projections, CO2 emissions would need to be drastically and rapidly reduced in line with the Paris Agreement. This work – with a novel approach – stresses the importance of controlling greenhouse gas emissions if we do not want to have significant parts of the Earth subjected to heat stress conditions that endanger the health and lives of the inhabitants of these regions, with the associated consequences of social instability, mass migrations, etc.

No conflict of interest