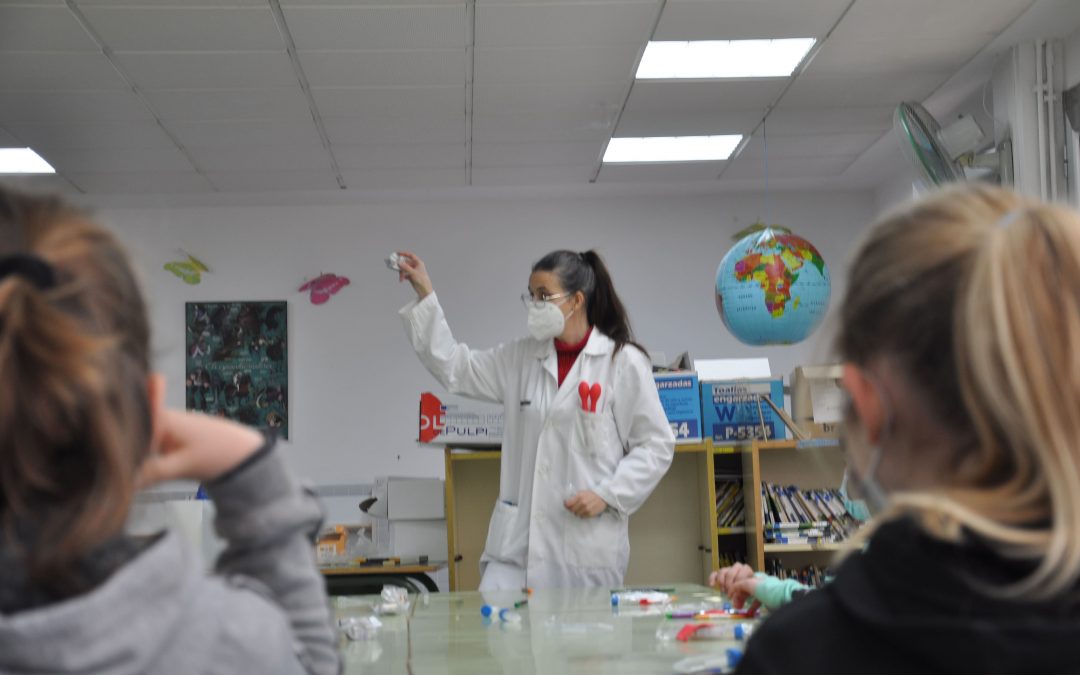 This year, the Foundation for the Promotion of Health and Biomedical Research of Valencia Region (FISABIO), an entity that forms part of the MEDNIGHT consortium, offered different scientific outreach activities framed within the MEDNIGHT 2022 project.

Researchers Back to School and Mind the Lab

Within the framework of the “Researchers Back to School” and “Mind the Lab” activity, the researchers and research management staff from the Fisabio Foundation brought the science that they work on in their laboratories to students between the ages of 3 and 12 years in six preschools and primary education centers in the Valencian Community. They did so through direct contact with the student body, to whom they gave an up-close look at what their work consists of and the importance of research for our quality of life. In addition, through practical workshops and games, the students learned about biochemistry, immunology, microbiology and physics while also having fun.

The main objective of this activity is for students to appreciate science as a cultural act that takes place in their daily life and that science is carried out by researcher staff that has a direct connection with that education center, their teachers and students, narrating their scientific experience and career in first person. At the same time, the project goes beyond showing the basic principles and fundamental laws of the experimental sciences, such as physics, chemistry and biology.

The workshops given were:

Under the umbrella of the “Researchers Back to School” and “Mind the Lab” activity, “Science Week” will also be held. It will be inaugurated November 7 to 11, 2022, where each day of the week, these same workshops will be held in a different school. This time, however, the Fisabio researchers will return to the schools in rural populations with a maximum of 15,000 residents in the Valencian Community.

The Fisabio Foundation and Seneca Foundation presented the “Mediterranean Faces of Science” Exhibit to various education centers in 2022.

This exhibit is framed within the MEDNIGHT project and presents information about female scientists from countries in the Mediterranean basin. It is made up of a collection of brief biographies of female scientists who have experienced very different personal, cultural and professional circumstances, but all of them have a common element connecting them: the Mare Nostrum.

The same women who appear in the exhibit have formed part of the process of creating it. In addition, the exhibit takes a journey through the science in all of these countries: Albania, Algeria, Bosnia, Cyprus, Croatia, Egypt, Slovenia, Spain, France, Greece, Israel, Italy, Jordan, Lebanon, Libya, Malta, Morocco, Montenegro, Serbia, Syria, Tunisia and Turkey.

The exhibit is formed of 28 A2-sized foam board panels, which have been sent in a package to the education center that has requested the “Mediterranean Faces of Science” to be displayed.

The panels were put on display for 15 days in each center, as per the following schedule:

In May and June, the Fisabio communication team recorded the second part of the “Mednight Expedition: the Ports of Science” documentary, framed within the MEDNIGHT 2022 project. The recording was filmed in two stretches aboard the sailboat of the MEDNIGHT expedition.

STRETCH 1 – Voyage to the island of Cyprus

The first voyage of the expedition in search of Mediterranean science was held from May 20 to 28 on the island of Cyprus. Experts were interviewed there who explained their research on microplastics, biodiversity and endemic diseases, among other subjects.

STRETCH 2 – Voyage to the Greek islands