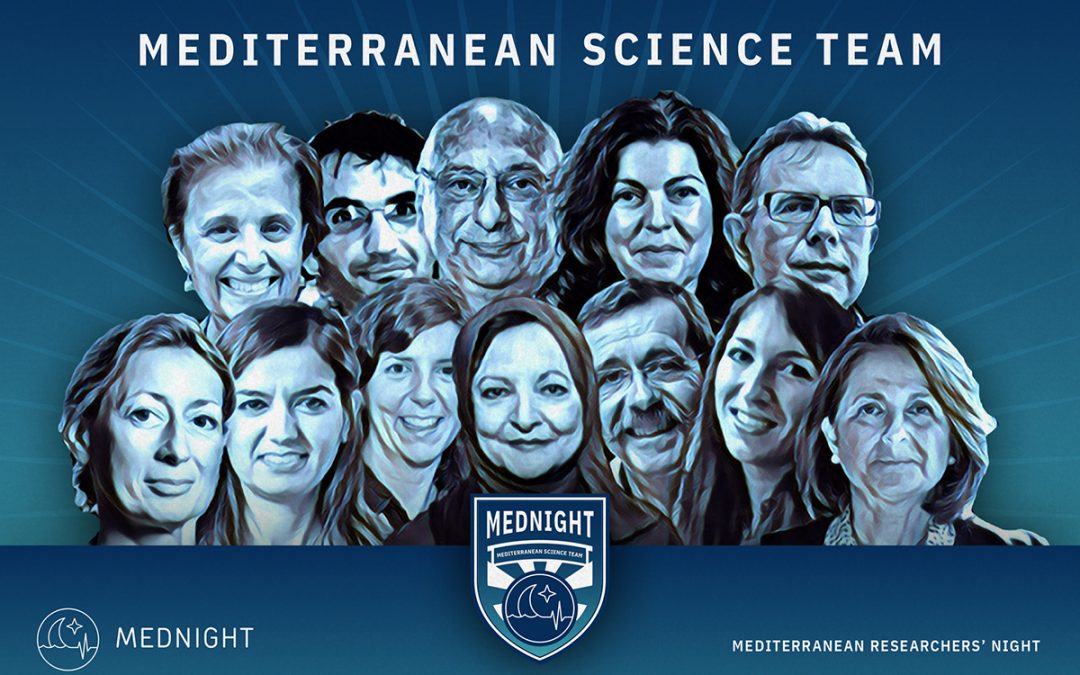 Informatrion about the selection process and the members of the jury, here

For MEDNIGHT, it is an honor to have created the first team of scientists that can serve as a symbol to unite Mediterranean countries with science as the common nexus.

The 11 researchers selected will receive an award during the gala, which will take place at Casa Mediterráneo, Alicante, on September 24 at 12:00 p.m.

Eleven have been chosen because we want the All-Mediterranean Science Team to symbolize a team, like a football team.

During the gala, each member of the Mediterranean Science Team will receive a football jersey with the MEDNIGHT coat of arms, symbolizing their belonging to a pioneering team in the league of science.

The members selected represent nine countries of the Mediterranean basin: Spain, Greece, Cyprus, Turkey, Egypt, Lebanon, Tunisia, France and Italy, which make this 2021 All-Mediterranean Science Team a first step toward creating a Mediterranean identity with science as the common nexus.

The 2021 All-Mediterranean Science Team is formed of eight women and three men, experts in topics of most interest to MEDNIGHT: sciences for the future, technology, health, climate change, anthropology and marine sciences.

The members of the first All-Mediterranean Science Team

These two biologists conducted a pioneering study that showed the flourishing flora and fauna of what is known as the Green Line in Cyprus. The Green Line is an area that divides the island of Cyprus, as well as its capital Nicosia, into two parts.

There, living beings have multiplied undisturbed.

Alain Aspect successfully demonstrated quantum entanglement, a turning point in modern physics. His work is a fundamental basis in the field of quantum computation.

Avelino Corma works on the molecular design of solid material catalysts. “Chemistry has been present in practically all the revolutions that have taken place in humanity: from fertilisers, which made it possible to develop agriculture, to medicines, which allow us to increase life expectancy, together with hygiene through chlorine, water disinfection…. We owe it to chemistry that we live longer,” explains Avelino Corma.

Mehio Sibai promotes healthy ageing. Her goal is to make advances in ageing science available to everyone, especially to people who have suffered the consequences of socio-political conflicts in places as hard-hit as Lebanon. For Mehio Sibai: “It’s a personal challenge, I want to bring the science of ageing with health and dignity to the whole world”.

In 1981, Chaabouni launched the first genetic counselling service and set up epidemiological studies on consanguinity in northern Tunisia, a region where the rate of genetic diseases, birth defects and mortality was particularly high. Her studies showed that in this region a quarter of marriages were between first cousins whose parents were themselves siblings.

She has been a consultant to the World Health Organisation (WHO) and the League of Arab States (LAS).

Katerina Harvati discovered the earliest known presence of Homo sapiens in Eurasia, suggesting that the beginning of the dispersal of early modern humans out of Africa occurred much earlier than officially recognised and reached much further than previously thought.

Her contribution is pioneering and innovative in the field of developmental neurobiology, as she studies how the brain develops under normal conditions and in models of sensory deprivation. “If we want to repair these lost senses in the future, we have to recover the brain connections that have been lost. In our lab we apply cellular reprogramming to recover visual neurons in blind animals, for example”.

Francisco Mojica coined the acronym CRISPR, for Clustered Regularly Interspaced Short Palindromic Repeats, a technology that is internationally regarded as the biggest biotechnology revolution of the century.

His team was the first (2005) to suggest that the sequences could be linked to the immunity of bacteria from being attacked by certain viruses. Mojica is also working on the use of bacteriophages as an alternative to common antibiotics. It is postulated that CRISPR-Cas technology will make it possible in the near future to provide cures for a multitude of diseases that are currently beyond our reach.

Her work covers a broad field that gathers studies from different disciplines, such as genetics, psychiatry and behavioural neuroscience. She has built up a remarkable library of Autism Spectrum Disorder cases, publishing more than 30 articles in prestigious international journals that can now benefit scientists worldwide, taking charge of the discovery of new genes and new biomarkers in autistic children and, most recently, developing a nanoformulation of vitamin D micronutrients for the treatment of autism.

Her work is changing the entire practice of neurology by increasing our understanding of neurological and genetic disorders.

Martina Pierdomenico is head researcher of a study, carried out with images from underwater robots, which has found the largest concentration of deep-sea rubbish ever recorded. Plastics, cars, cookers and even a Christmas tree are among the objects found in the Strait of Messina, at a depth of 1000 metres.

The jury of the Mediterranean Science Team 2021

The jury of the Mediterranean Science Team is made up of researchers of excellence in each of the aforementioned subjects of interest.

Maria A. Blasco. Director of the Spanish National Cancer Research Centre (CNIO)
Head of the Telomeres and Telomerase Group – CNIO. For more than 20 years, Blasco´s work has focused in demonstrating the importance of telomeres and telomerase in cancer, as well as in age-related diseases. Her achievements have been recognized by the following international and national awards: Josef Steiner Cancer Research Award, Swiss Bridge Award for Research in Cancer, Körber European Science Award, the EMBO Gold Medal, the Rey Jaime I Award in Basic Research, the Fundación Lilly Preclinical Research Award, and the Santiago Ramón y Cajal National Award in Biology. Blasco holds two Doctorate Honoris Causa from the Universidad Carlos III of Madrid and from Universidad de Alicante and in October 2017 she received the Scientific Merit Award of the Generalitat Valenciana.

Professor Nektarios Tavernarakis. He is Vice-President of the European Research Council (ERC). He is also President of the Foundation for Research and Technology – Hellas (FORTH), and Professor of Molecular Systems Biology at the Medical School of the University of Crete, Heraklion, Greece. He also heads the Neurogenetics and Ageing laboratory at the Institute of Molecular Biology and Biotechnology of FORTH.

Fernando Valladares. Research Professor at CSIC. He currently works at the Biogeography and Global Change department of The National Museum of Natural Sciences belonging to the Spanish Research Council (CSIC). He is also associate professor at Rey Juan Carlos University (Madrid). Fernando does research in Botany, Ecology and Evolutionary Biology within the framework of global change impacts on terrestrial ecosystems. He is and has been involved in EU projects like ‘Functional Significance of Forest Biodiversity in Europe (FunDivEUROPE)’ and “Optimizing the management and sustainable use of forest genetic resources in Europe (GENtree)”.

Pampa García Molina. Coordinator and Chief Editor at SINC. Journalist specialising in science and technology, graduate in Physics. SINC is the first science news agency in Spanish, public and open access under Creative Commons license. Pampa is also co-founder of the student association ‘Hipatia-Physics and Culture’, which is dedicated to the organisation of cultural and scientific events.

Juan Fuster Verdú. Research professor at the Institute of Corpuscular Physics (IFIC), a joint centre of the University of Valencia and the Spanish National Research Council (CSIC). He has received a Humboldt Research Award. Juan Fuster Verdú is the institutional delegate of the CSIC in the Valencian Community. He is an expert recognized for his work on precision measurements of the Standard Model. Fuster launched in the IFIC a pioneer research group in Spain in the development of silicon detectors applied to particle physics. This group built a part of the internal detector of the ATLAS experiment, one of the ‘giants’ of the LHC that discovered the Higgs boson in 2012.

Prof. Dr. Gulsun Sağlamer. Former Rector of Istanbul Technical University (1996-2004). She is a professor of architecture at Istanbul Technical University. She was a member of the Scientific Committee of TUBITAK-INTAG (The Scientific and Technical Research Council of Turkey). Prof Sağlamer is an Executive Committee Member of the International Association of University Presidents (IAUP) (2003-), President of CMU (Community of Mediterranean Universities) (2012- ) and President of European Women Rectors Association (EWORA).