“Genetically, it is in our benefit to follow a Mediterranean diet” 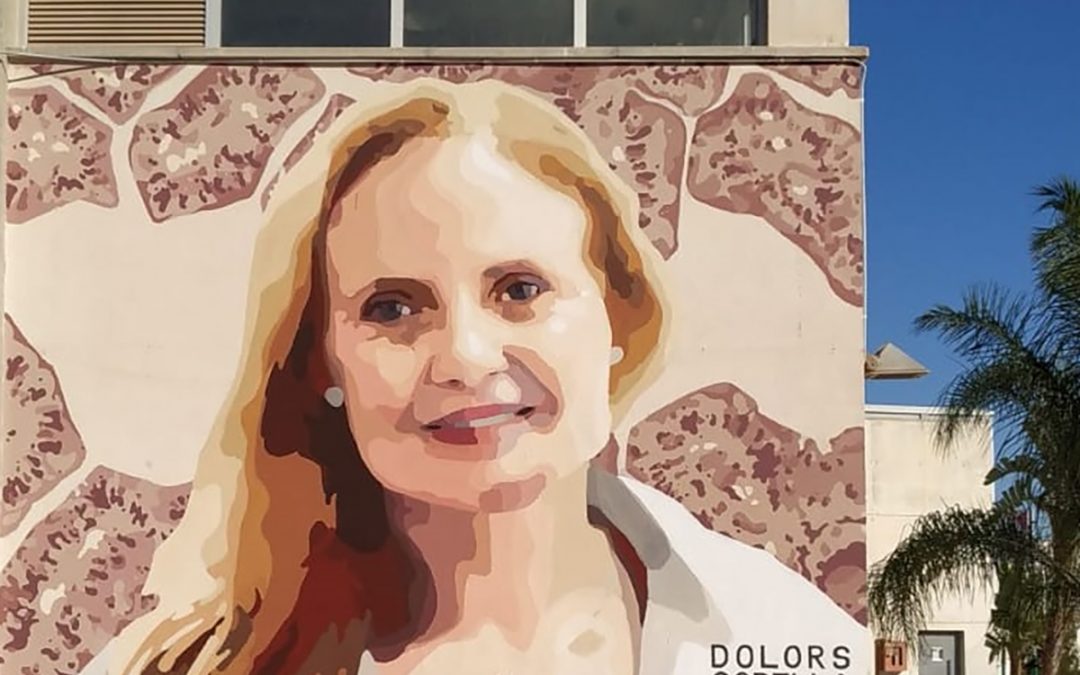 Dolores Corella Piquer is a Doctor of Pharmacy, researcher at the University of Valencia and the CIBEROBN.

Professor of Preventive Medicine and Public Health at the University of Valencia, a pioneer in research into an internationally promising area, nutritional genomics. Corella is working in a field that will transform the way we eat.

Image above: mural created by the UPV for the MEDNIGHT 2020 edition.

Personalised diet and nutrigenomics are already being bandied about in many forums. If there is anyone who is an expert in this field, it is Dolores Corella. “I have been researching nutritional genomics for more than 20 years to learn more about these personalised diets,” she says. She has led the way and is working to find answers to what is best to eat to be healthy, taking into account our genes.

Dolores Corella researches at the molecular biology stage, at the most basic level of our organism, and she is also a professor of Preventive Medicine and Public Health. This means that one of her tasks is to pass on the results of her work, aimed at converting food into preventive medicine, to the population. Taking care of ourselves by eating.

What is the basis of your research?

We start with the most basic thing, which is to know why diseases occur, especially cardiometabolic diseases, diabetes, even obesity considered as a disease, because it is a risk factor for some cancers, cardiovascular diseases, etc. We all know that for most diseases there are two particularly relevant factors: on the one hand, the genetics of each person, and on the other hand, environmental determinants.

Are genes the first target?

Yes, what we are starting to investigate is the genetic basis of these diseases, for example diabetes and obesity. We are researching whether there are people who are genetically more prone to obesity or diabetes. We are looking for these genes, which were unknown until now. Once we have located the genes related to these diseases, we see if they are affected in one way or another by diet. In other words, whether they respond differently or not depending on what we eat.

Are there specific obesity genes?

Yes, the FTO gene is the gene most closely related to common obesity. The FTO gene has two variants, one that increases the risk of obesity and another variant in which obesity is not a risk. If you have the FTO variant for obesity risk, eating the same as someone else can make you fatter. With a simple blood sample a person can find out through DNA analysis whether they have the higher risk genetic variant of the FTO gene. But it is complex, because there are other genes, in addition to FTO, that also increase the risk of obesity. We are working on identifying them.

If we were nutritionally disciplined, wouldn’t obesity exist?

Probably not, but the person would have to be very aware, because it’s not just about whether you have this gene or not, it’s about the lifestyle you lead. We undertook a study that we published in 2010 with a group of people who had the genetic variants with the highest risk of obesity in the FTO gene. These people did not know their genetics. We got some very interesting results. The group of people who were university educated, despite having the obesity gene variants, did not have increased weight. It’s not that having a university education means that you don’t put on weight, but it does mean that this group of people take more care of themselves, are less sedentary, and are more concerned about controlling their weight. In this way, they are counteracting this genetic influence. This tells us that our genetic predisposition to obesity, and other diseases, can be modified.

Are we getting closer to a personalised diet based on our genes?

We do not have enough knowledge yet. We are talking about a very young discipline, especially with regard to nutrigenetics and nutrigenomics, which we are still learning. First we will have to know the susceptibility genes well, and then it is about finding the best diet for each person.

Moreover, because the populations in the world are so diverse, we have to find specific genes for different groups. We have studied genetics not only in Spain, but we have many collaborators in different countries. And there are important differences.

The Mediterranean population has a slightly different genetic make-up than people from Asia or Africa, but even Caucasian Europeans from Northern Europe. We have different genetic variants than people in the north. Something that may be good for them, a diet that works, when we translate it here the response is not as satisfactory as it should be.

We try to promote local diets, such as the Mediterranean diet, and that is because our genome has been configured for it over thousands of years of evolution and in a global way it is more beneficial for us. If they do a study in Finland, we cannot extrapolate it to the Mediterranean population, because we have our own genetic variants and it is possible that what works for them may not work for us. But we cannot generalise. When we talk about precision nutrition or precision medicine, that is precisely the point: that not everything works for everyone.

What is the most beneficial ingredient of the Mediterranean diet: olive oil, olives, Jabugo ham…?

The advantage of the Mediterranean diet is that the pattern of food intake is better than the sum of its parts. Meaning that it is not about one good food or ingredient, but that taking them all together enhances their benefits.  For example, olive oil means that when you fry tomato sauce its antioxidants are better assimilated than if you eat the tomato on its own.

We study the whole dietary pattern and then also individual foods. Because we are interested in knowing everything at the precision nutrition level.

For example, what individual foods do you study?

What about Jabugo ham?

Oranges are rich in vitamin C, carbohydrates, sugars and, as we eat them whole, they have a lot of fibre; we wanted to compare them with a food that we have always been interested in working with, which is Jabugo “pata negra” (black leg) ham.

What we are looking at is what difference does it make if you wake up and eat ham instead of oranges for breakfast: which genes are expressed in one case and which in the other? We study what the difference is between having one and the other at all stages. And we observe what has happened four hours after eating different foods according to each person’s genes. We do a very complete study of the effect of each food person by person.

And we will even go beyond each person’s own genes. In this study we have not yet taken it into account, but we are also starting to study the effect of the genes of the bacteria that each person incorporates in their digestive system on the influence of diet. The microbiome of bacteria has a huge influence on our health, so we are also very interested in knowing not only how they influence the effect of the food we eat (for example, by metabolising sugars), but also how our diet affects them: whether what we eat benefits the bacteria that are good for us or not.

Will your work transform the way we eat?

All these are groundbreaking studies in the world. We are opening up a whole new field and discovering things that nobody knew about until now. With our studies we will be able to tell a specific person if Jabugo ham is good for them. And ham is just one example. We will be able to create a personalised diet with the best foods for each individual, a diet that will serve to keep diseases to which a person is genetically predisposed at bay. That is the precision diet we are looking for.

But it will be necessary to wait many years to have that ideal menu, so that food becomes a preventive “treatment”…

It is so complex that I think science is lagging behind what people are asking us to do. Feeding is something we all do every day, and people want to be healthy, not to put on weight, to live longer. And they urgently want to know what is the best diet, something for which we cannot yet provide an answer. In addition, there are many other factors that we have to take into account. The diet we suggest to each individual will have to be proposed according to the foods they like, for which we have also found that they respond to a genetic predisposition. There is a genetic predisposition to be more or less sweet-toothed, or to like certain types of flavours, smells and textures. But also, from now on, any diet we propose must take climate change into account.

Food contributes 25 per cent of carbon dioxide emissions on the planet. We are now not only concerned with recommending diets that are healthy for people, they also have to include sustainable food. We are already working on including the calculation of CO2 emissions from food, what it costs the environment to produce it. We are giving advice not only on healthy food, but also on sustainable food. We want people to also look at how it has been produced, if it is local, if sustainable agriculture has been used, and so on. You have to think about the amount of emissions that are behind each of the foods, the waste that you generate if you have used plastics, how you do your shopping, how you preserve it. All of this is brutal, and this impact on the planet has to be measured. Especially now, when we don’t know if we are already in a reversible or totally irreversible situation.

What about meat – should we eat it or not?

Meat has always been controversial, and even more so now. The Mediterranean diet in general is poor in red meat. In the past, there were no planes to transport food. Food was adapted to local resources. We had rabbits, chickens, poultry, some goats, sheep, but cows were difficult. Meat was expensive and difficult to preserve, and it was only used for special occasions. That is why the Mediterranean diet is really low in red meat. But we should not take a radical stance against meat either: it should be consumed in the right proportion. We need it in our diet, otherwise we will have deficiencies. We have to think about a new concept of sustainability where everything is integrated, but everything in the right proportion. What does not make sense are extensive animal farms, producing large quantities of greenhouse gases, depleting aquifers, etc. We must seek a balance in everything, integrating meat production in balance with nature. Meat provides essential amino acids and vitamin B12. It is not a question of eradicating it from our diet (although each person is free to choose according to their tastes), it is a question of finding a balance.