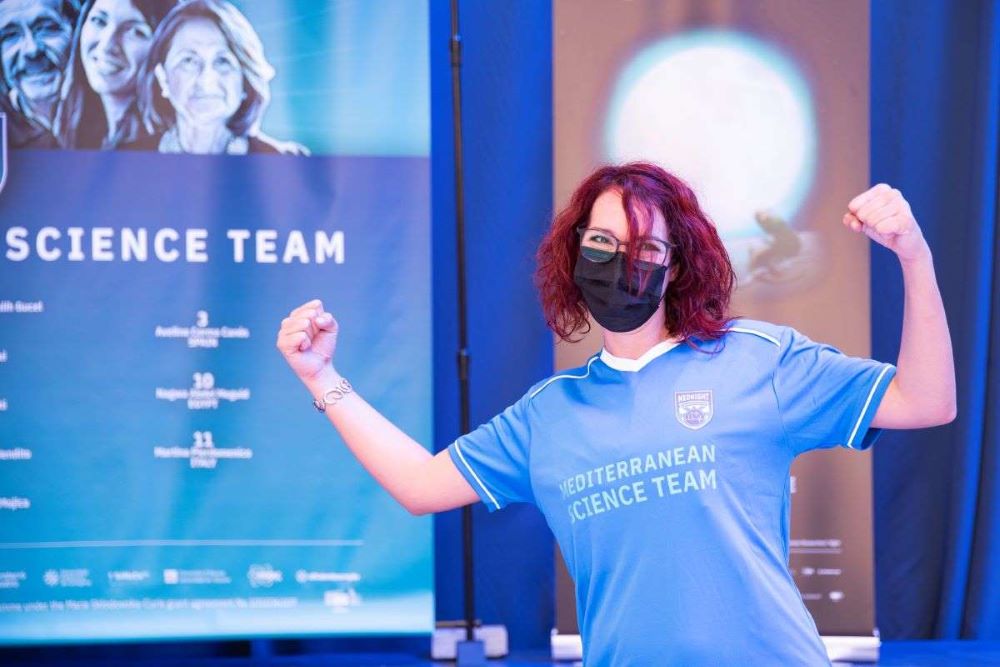 It was what we promised, the party of Science. Casa Mediterráneo, an old train station, converted into a Mediterranean blue space, hosted the gala presentation of the first team of scientists from different Mediterranean countries, The Mediterranean Science Team.

In the photo above, Martina Pierdomenico, IAS-CNR researcher in Italy. Martina is a member of the 11 of the National Team. In the photo he is wearing a football T-shirt, the T-shirt of the Mediterranean Science Team. “The objective of generating a team, similar to football teams, is to create a powerful symbol that can serve to show the need for science to reach society with as much impact as football does. I have organized on numerous occasions the Spanish Selection of Science in Quo, this time, the objective was more ambitious, it was about generating an international and Mediterranean team, and today it is a reality “, explains Lorena Sánchez, editor-in-chief of QUO magazine , organizer of the Mediterranean Science Team and the presentation gala at Casa Mediterráneo.

Scientists from nine countries wore the team’s T-shirt, with the shield of MEDNIGHT, the Mediterranean Researcher`s Night, promoted with funds from the European Commission as part of the Marie Sklodowska-Curie actions and coordinated by the Alicante-based company El caleidoscopio.

Full capacity. Guests were welcomed by the music of a grand piano and the voice of Cypriot pianist Joanna Panayi, science communicator at SiCo Cyprus, partners of MEDNIGHT. Serrat’s Mediterranean, from Algeciras to Istanbul, was played for the first time at a gala for science.

Most of the guests were scientists and personalities from the Valencia region, but there were also faces from the art world, and even from the most popular festivities in Alicante, such as La Bellea del Foc.

But there was a guest of honour at the ceremony, President José Luis Rodríguez Zapatero, founder of Casa Mediterráneo, a firm supporter of the alliance of civilisations, and of the value of science to build a broad and free social thought, essential to take sides for a less bad future.

In his speech, President Zapatero brought Borges into the room, so that the blind man who dreamed of mirrors and labyrinths could accompany a party with a creed that he also professed: “Science is my only religion”, said the president. And so it was for the two hours that the gala lasted for the more than 100 guests. In that small eternity, for scientists with different languages and religions, some of them immersed in socio-political battles like the Cypriots, or the representative of Tunisia, during that parenthesis, science served as a nexus of peace, with a common language spoken by each and every one of the people who experienced on 24 September, in Casa Mediterráneo, a gala different from all the galas, a gala in which women scientists sat in the front row.

Reception. Two members of the team, Habiba Bouhamed Chaabouni, researcher in medical genetics at the University of Tunis and Nagwa Abdel Meguid, Prof of Human Genetics at National Research Center, Egypt. She has been running a research laboratory on children with special needs for more than 20 years. They are welcomed by Cristina, a key member of El Caleidoscopio team.

“I dedicate part of my work to empowering mothers because in my country, in the face of a child disability or disorder such as ASD, mothers are blamed”, Nagwa Abdel Meguid

Before the start of the gala, President José Luis Rodríguez Zapatero met in the Agora room of Casa Mediterráneo to talk with the scientists of the Mediterranean Science Team. He asked the Turkish scientist, Nurcan Tunçbağ, about the delicate situation in Turkey at the moment. In the photograph, he talks with the Cypriot scientist Salih Gücel.

“The objective of the Mediterranean Science Team is fully in line with our aims, as it is one of our actions to fully support Mediterranean science, the role of women researchers, and the work of the entire scientific community in the improvement of human rights”, José Manuel Molina, secretary general of Casa Mediterraneo.

“Borges said (and no one is surprised that I quotes a poem by Borges): Two Greeks are talking, Socrates, and perhaps Parmenides, it is convenient that we never know their names, the story will thus be more mysterious and more authentic. The subject of the dialogue is abstract, of myths that both do not believe, they do not argue, and they do not want to persuade or be persuaded, they do not think about winning or losing. They agree on one thing, they know that discussion is the not impossible way to arrive at a truth. Free from myth and metaphor, they think, or try to think. We will never know their names, but this conversation between two strangers in a place in Greece is the capital fact of history. They have forgotten prayer and magic, and, with it, they have built knowledge, science, progress. And that science, in the West, was born in the Mediterranean. Perhaps in Miletus, once a Greek city, now Turkish, a city enriched by diversity, which gave birth to philosophy.

The Mediterranean, the cradle of so many hopes, the birthplace of aspirations for human rights, the convocation of so many adventures in history, must today recover that capacity for union, and the European Union must accompany the Mediterranean by placing more emphasis on Eastern Europe, on the relationship with the East and with the South, which is the essence of Europe, with countries such as Turkey, which has a destiny of cooperation, of broadening the vision of what Europe represents. That is why I applaud this initiative which makes us love science, which is the only faith I profess, which can be universal, embraced in East and West, in any culture, embraced by all civilisations, nothing can bring us closer to a single humanity than science and knowledge.

To all the award winners, my congratulations, my stimulus. To discover, to love research, responds to two great motivations, the first is astonishment, the capacity for astonishment, and secondly, humanism, the strength to contribute to the destiny of others, of our species. In the Mediterranean, let us devote our efforts to the protection of our sea, of our environment, of this planet Earth, which can do without the human species, but we cannot do without it. Let us take care of it, from this Mediterranean House, which is called to be a centre for dialogue, that dialogue in which Borges places the beginning of things”

Words from the members of the Mediterranean Science Team Jury

“It is very important to support science in the Mediterranean because we have the same destiny”, Professor Nektarios Tavernarakis, Vice-President of the European Research Council (ERC).

“As a member of the jury, I was pleasantly surprised to see that most of the scientists we had to vote for were women,” Gulsun Sağlamer, President of European Women Rectors Association (EWORA).

The members of the Mediterranean Science Team collect their T-shirts.

The T-shirts are a symbol, because the aim is for the Mediterranean Science Team to have as much impact on society as football teams have, they deserve it.
Those attending the gala had the opportunity to listen to the scientists of the Mediterranean Science Team explaining their research. One by one, they told the objective of their research, their achievements, and the road ahead.

“Biological systems interest me a lot as an engineer, they are like a machine, of parts that communicate with each other. These molecules include proteins, genes, and the broken parts in the system are what cause cancer, neurological diseases, Alzheimer’s, everything. My approach is to understand diseases from an engineer’s point of view, it’s about fixing what’s brokenn. I would like to make a plea to universities to invest in STEM careers as soon as possible.”, Nurcan Tunçbağ

We now understand that many of the disorders of our mind begin early in the brain’s development. In my lab I aim to understand how our process receives sensations, how it sees, how it hears, how it perceives the world.

“We now understand that many of the disorders of our mind begin early in the brain’s development. My lab aims to understand how our process receives sensation, how it sees, how it hears, how it perceives the world and how the brain has this amazing ability to adapt and repair itself”, Guillermina López-Bendito

“I dedicate part of my work to empowering mothers because in my country, in the face of a childhood disability or disorder, such as ASD, mothers are blamed”, Nagwa Abdel Meguid.

“One day I came to my in-laws’ house and I said to my wife: Honey, I discovered something that one day appears in biology books”, Francis Mojica.

And there was also time to have fun