HUNDREDS OF YOUNG PEOPLE ENJOYED THE MIND THE LAB 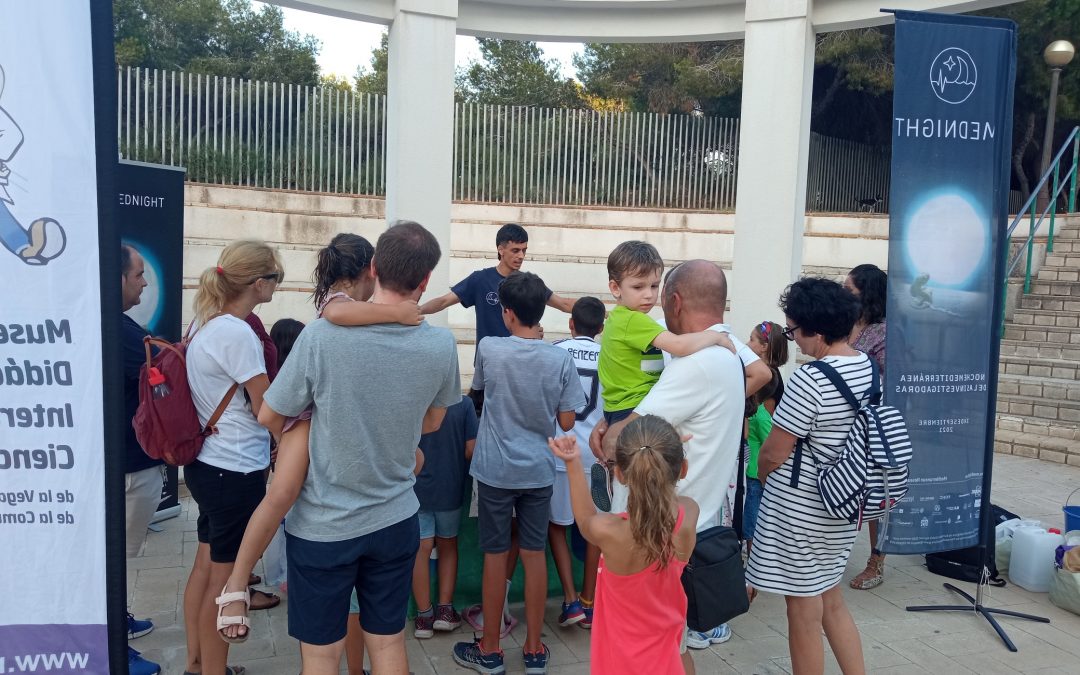 IN THE VEGA BAJA COMARCH

As part of the activities of the Mednight 2022, whose big day will be on September 30, the MUDIC again took the scientific outreach activity of the guerrilla Mind the Lab to the municipalities of Guardamar, Orihuela, Pilar de la Horadada and Torrevieja. In spaces as representative of these coastal towns as the Reina Sofía Park; the Cinema Boardwalk from Pilar de la Horadada; the Plaza Encarnación Puchol Square and Playa Flamenca, the people could live science in a spectacular and interactive way. More than 400 people participated in the activities.

The 7 experiments that formed this edition become a journey through mathematics, physics, biology and chemistry. Attendees were surprised by the ability to form a circuit of more than 30 people; tricks that can be done with cyclic numbers. The enthusiasm before the ascent of the oil ball and the closing with the giant bubble show made the activity unforgettable for the attendees, especially the girls and boys.

Mind the Lab was born in 2017 in Greece in order to bring scientific dissemination to society in places of common use for the entire population, such as underground stations, hence its name. His success in the Athens underground led him to emulate the initiative in stations in other major cities such as Madrid, Berlin and Edinburgh. These are short activities of great visibility and impact to arouse interest and curiosity for science.

With Mind the Lab we have given back to local citizens and visitors the possibilities, applications and contributions of science, as they had never seen before. This is the second year in which MUDIC organizes this activity coordinated by colleagues of Science Comunication Greece (SciCo). The experience has again been fantastic, with a proposal of experiments mostly different from those of the first edition, the result of a great acceptance and and enthusiasm.

Mednight is a Mediterranean science dissemination project. It connects knowledge centres from both ends of the Mediterranean Sea. Mednight brings together the participation in a consortium of 10 institutions: FISABIO, INCLIVA, CSIC, MUDIC, El KCaleidoscopio, SciCo Cyprus, the University of Messina, the Kadir Has University of Istanbul and the European Association of Women Rectors (EWORA), under the coordination of SciCo Greece.

MEDNIGHT takes place within the framework of the European Night of Researchers (European Researchers’ Night), a scientific dissemination project promoted and financed by the European Commission as part of the Marie Sklodowska-Curie actions (grant agreement No 101061190) of the Horizon 2020 programme.