Fisabio participates in the first complete study of the DNA of the Demodex folliculorum mite, the only animal that lives in symbiosis with the human body 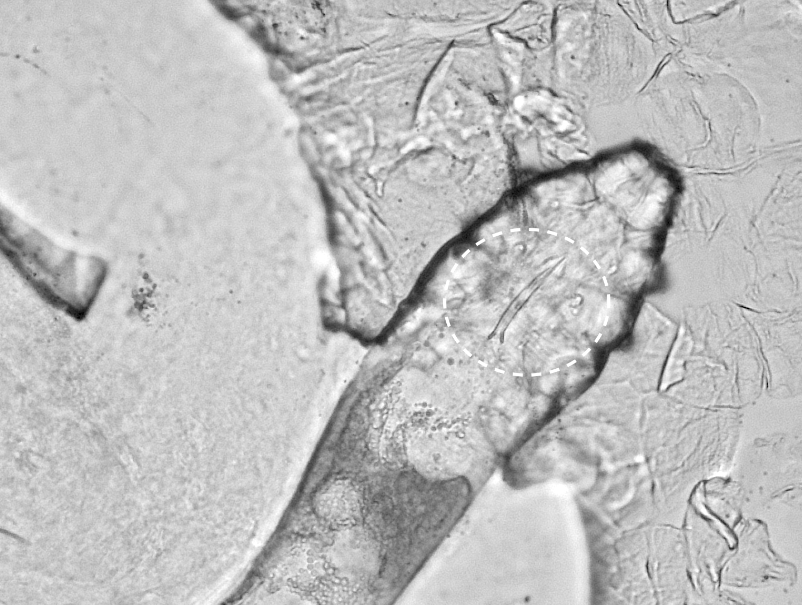 • This international study, in which Fisabio, the University of Valencia, CSIC and CIBER are participating, describes the lifestyle of the D. fulliculorum mite
• Their research has revealed that this animal is shedding many genes and cells and has gone from being an external parasite to an internal symbiont

The Foundation for the Promotion of Health and Biomedical Research of Valencia Region (Fisabio), together with the University of Valencia, CSIC and CIBER, has participated in the first genome sequencing study of the Demodex folliculorum mite, the only animal that lives in symbiosis with the human body. The study was led by Bangor University and the University of Reading.

These mites are transmitted at birth and are carried by almost all humans. Their number reaches its maximum in adults as the pores grow. Measuring 0.3mm long, they are found in hair follicles on the face, nipples and eyelashes and feed on the sebum naturally released by pore cells. They are activated at night and move between follicles to mate.

One of the main results of the study is that this mite survives with a minimum number of genes. “The loss of essential genes for DNA repair and the lack of exposure to potential partners that add new genes to their offspring may have led the folliculorum to an evolutionary dead end and possible extinction,” explains Andrés Moya, a researcher in the Area of Genomics and Health of Fisabio and author of the article.

Dr. Alejandra Perotti, professor of Invertebrate Biology at the University of Reading, who has co-directed the research, states that, in addition, “These mites have a different arrangement of genes than other similar species, due to the fact that they have adapted to a protected life within the pores. These changes in their DNA have led to some unusual body features and behaviors.”

The study, published in “Molecular Biology and Evolution,” explains that due to its isolated existence, with no exposure to external threats, without competition to infect hosts or encounters with other mites with different genes, genetic reduction has led to it developing into extremely simple organisms with tiny legs powered by just three single-celled muscles. They survive with the minimum repertoire of proteins—the lowest number ever seen in this species and other related ones.

This genetic reduction is also the reason for their nocturnal behavior, according to the study results. The mites lack ultraviolet protection and have lost the gene that makes animals wake up with daylight. They are also unable to produce melatonin, a compound that makes these small invertebrates active at night. Despite that, they are able to fuel their nocturnal mating sessions using the melatonin that human skin secretes in the afternoon.

The study also explains that their unique genetic disposition gives rise to the unusual mating habits of these mites. Their reproductive organs have moved forward, and males have a penis that protrudes upwards from the front of their body. This means they have to get under the female when they mate and copulate while both hold onto the human hair.

Another of the research discoveries is that one of its genes has been inverted, which gives its buccal appendage a very particular arrangement, since it protrudes to collect food. That helps survival in early ages.

Also, these mites have many more cells at a young age compared to their adult stage. That contradicts the earlier assumption that parasitic animals reduce their cell numbers early in development. The researchers maintain that this is the first step for the mites to become symbionts.

Until now, some studies had assumed that mites do not have an anus and therefore accumulate droppings throughout life before releasing them when they die, which caused inflammation of the skin. However, this study confirms that, in fact, they do have an anus, which is why many skin conditions have been wrongly attributed to them.