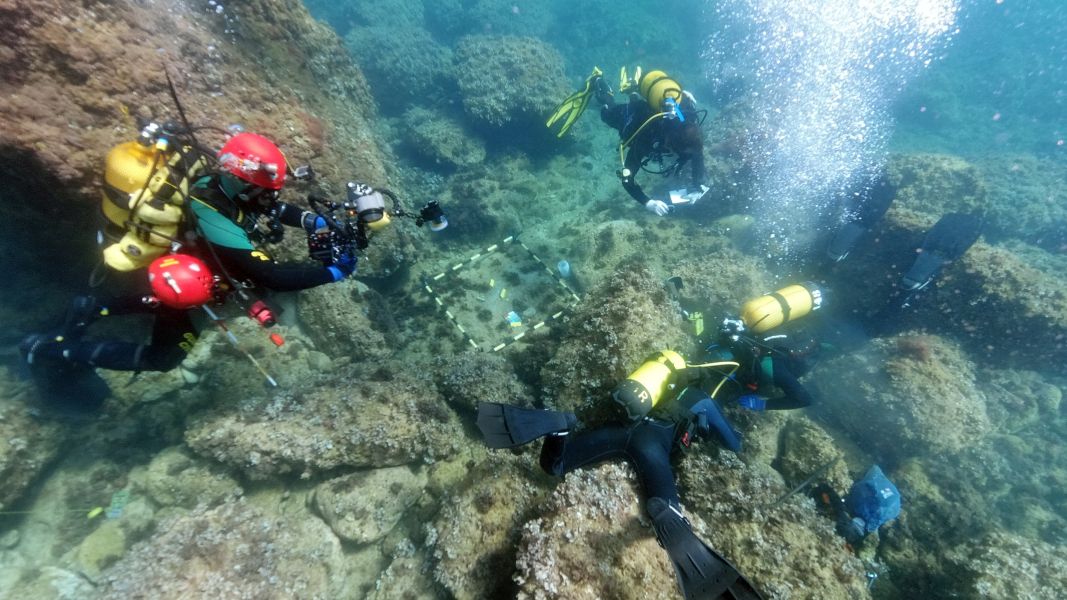 For 1,500 years, the seabed of the island of Portitxol in Xàbia has sheltered one of the largest collections of Roman gold coins found in Spain and Europe.

It consists of 53 Roman coins which, after being analysed by scientists from the University of Alicante Research Institute in Archaeology and Historical Heritage (INAPH), have been dated to the late Roman period, in particular between the end of the 4th century and the beginning of the 20th century.

Their perfect state of preservation, which even allows us to read the inscriptions, identifies them as coins from the periods of government of these Roman emperors: Valentinian I (3 coins), Valentinian II (7 coins), Theodosius I (15 coins), Arcadius (17 coins), Honorius (10 coins) and an unidentified coin.

It was a chance discovery of 8 coins by two amateur freedivers – Luis Lens and César Gimeno – that triggered the system that the Directorate General for Culture and Heritage has in place for these cases. From that moment on, archaeologists from the University of Alicante and the Spanish Civil Guard Special Underwater Brigade (GEAS), in collaboration with the Town Council of Xàbia, carried out several dives in the area which resulted in the discovery of 53 gold coins and three nails -probably copper- as well as some very deteriorated lead remains which, according to all indications, could belong to a sea chest.

This is one of the largest sets of Roman gold coins found in Spain and Europe, as stated by  Professor in Ancient History Jaime Molina and University of Alicante team leader of the underwater archaeologists working on the wreck. He also reported that this is an exceptional archaeological and historical find, since it can offer a multitude of new information to understand the final phase of the fall of the Western Roman Empire. The historians point to the possibility that the coins may have been intentionally hidden, in a context of looting such as those perpetrated by the Alans in the area at that time.

Therefore, the find would serve to illustrate a historical moment of extreme insecurity with the violent arrival of the barbarian peoples (Suevi, Vandals and Alans) in Hispania and the final end of the Roman Empire in the Iberian Peninsula from 409 AD

The coins will be restored by the IVCR+i and will then be exhibited in the Soler Blasco Archaeological and Ethnographic Museum in Xàbia, in compliance with the exhibition safety measures, as explained at the presentation ceremony of the discovery, which was attended by Mayor of Xàbia José Chulvi, University of Alicante Vice President for Research Juan Mora Pastor, and head of the Spanish Civil Guard Brigade in Calpe Jerónimo Pacheco. The two divers who discovered the first coins, Luis Lens and César Gimeno, were also present.

During the speeches, the University of Alicante Vice President for Research highlighted the value of the survey, documentation and photogrammetry work carried out by the scientific team of the UA, in which experienced underwater archaeologists with extensive national and international experience are taking part. Led by professor of Ancient History Jaime Molina, the team also includes the participation of José Antonio Moya, Jordi Blázquez and Alejandro Pérez, from the University of Alicante Research Institute for Archaeology and Historical Heritage (INAPH).

In order to continue investigating the area, the Valencian Government has allocated a budget of €17,800 to carry out underwater excavations in the area of the discovery. The campaign will be led by the same team currently leading the General Research Plan for Underwater Archaeology (Archaeological Prospecting of Portitxol in Xàbia), in which both the University of Alicante and the Museum of Xàbia are participating.

The bay of Portitxol in Xàbia is an area well known for the abundance of underwater archaeological remains currently under study. Anchors, amphorae cargoes, ceramic remains from different periods, metallic material, elements associated with ancient navigation, etc. have been rescued to date in the various archaeological surveys promoted by the City Council, the University of Alicante and the Valencian Government since 2019.