“The Mediterranean forest smells of thyme, rosemary and wormwood.” 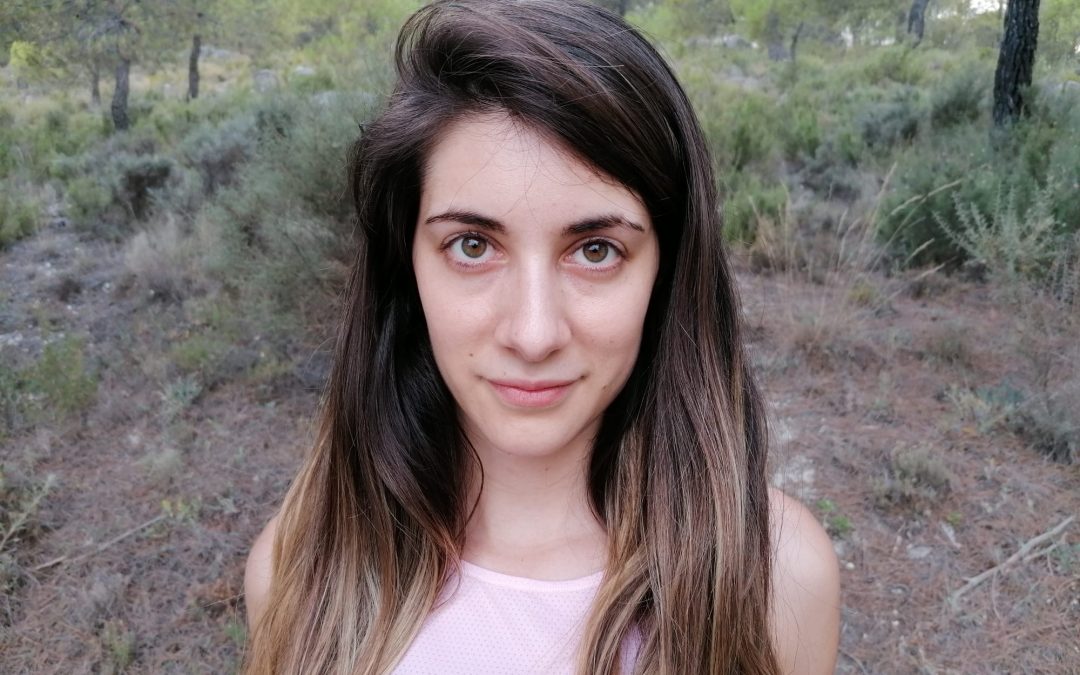 María Ángeles Pérez Navarro  is a researcher at the Centro de Investigación Ecológica y Aplicaciones Forestales (CREAF), where she developed her thesis in collaboration with the University of Murcia (UMU). She has worked on the effects of extreme droughts on Mediterranean vegetation, specifically with semi-arid scrubland and also with some tree species. She was born and raised in Moratalla, on the border between Murcia and Albacete, and the forest is part of her childhood.

“My favourite smell is the one my father used to bring on Sundays, because he would go to the mountains and when he came back he smelled of thyme, he smelled of rosemary, he made me feel the smell of the forest in summer”

What exactly is a Mediterranean forest?

It is the typical plant formation of the Mediterranean climate, which has the particularity of summer drought, that coincidence of periods of high temperatures with low rainfall that we experience in summer in a large part of the Iberian Peninsula, and also in the south of France, Italy, Greece, even on the west coast of the Mediterranean basin and in some areas of North Africa. These are regions where, in contrast to the summer drought, there are rainier and cooler autumns and winters. This results in vegetation that is resistant to climatic extremes, tolerant to drought. There are other places in the world, such as the southwest of Australia, South Africa and the coast of Chile, which have a similar climate and where it is also possible to find this type of vegetation. In the case of the Iberian Peninsula, the Mediterranean forest is the predominant plant formation.

What species characterise it?

Species adapted to drought, such as holm oak, gall oak and cork oak, as well as different species of pine depending on the altitude, and even some other species of oak. Of all the Mediterranean vegetation, oak species are the least drought tolerant. But we cannot forget the importance of the scrub in these forests. We sometimes speak of these trees, oaks and pines, as emblematic species, but the scrub species are no less so. The Mediterranean is a forest structured on different levels, with one level of tree species and another of well-developed scrub species, and sometimes with herbaceous species too. In the Murcia area, for example, it is quite common to find Stipa tenacissima (esparto grass) because esparto grass was traditionally used to make shoes and fabrics, and its presence was favoured. The shrub layer is often very aromatic. The Mediterranean forest smells of thyme, lavender, rosemary and wormwood.

In the more humid Mediterranean areas, the shrub species are less aromatic and larger, reaching considerable sizes, such as mastic, kermes oak, hawthorn and blackthorn, which can grow up to several metres in height. In areas with less rainfall, on the other hand, smaller bushes predominate, such as heather, rockroses, Cistus (jaguarzo), and often aromatic species, such as thyme, lavender and rosemary.

And what animals inhabit the Mediterranean forest?

In the Mediterranean forest we can find a great diversity of animals, mammal species such as ibex, deer, roe deer, wild boar, rabbit, fox, marten, genet and the emblematic wolves, wild cats and Iberian lynxes. We can also find many species of birds such as the red-legged partridge, the European roller, the crested lark, and different species of birds of prey (goshawk, tawny owl, golden eagle, vulture, eagle owl, little owl, etc.), as well as a good number of species of amphibians and reptiles.

Many of these animal species are associated precisely with these areas of lower rainfall, more open forest, rich in small shrubs and with a low density of trees. In spite of being mostly arid areas, we can see that the biodiversity they harbour is very high.

Is Doñana an example of it?

The Doñana landscape includes several plant formations. On the one hand, the area of the dunes, where there is a predominance of Pinus pinea, which is a pine tree that has been widely used in plantations to fix the dunes in past centuries. But it also has an extensive area that is a representative example of this Mediterranean forest with diverse scrubland. In Doñana there are different scrub formations, with some areas with heather-rich scrub (monte negro) and others rich in Cistus and rosemary (monte blanco). These scrublands, as well as being sources of plant and animal diversity, are more resistant to drought and fire than areas of pine forest.

Is this type of forest affected by climate change?

Climate change means an increase in temperatures, and in the case of the Mediterranean basin it will also potentially lead to a reduction in rainfall. With this, it might seem quite logical that the Mediterranean forest, which is adapted to drought, will do well. However, this is not that simple.

With the increase in temperature, trees will die in the warm limit (because it will become too hot and dry), i.e. the south of the Iberian peninsula, and more trees will be born in the cooler limit (which with climate change will no longer be so cold), i.e. the north of the peninsula and the south of France. After other climatic changes in the past, these migrations of forests have been observed. Forests migrate, as people migrate in adverse conditions, although more slowly.

Ideally, the Mediterranean forest would move towards more climatically favourable areas, i.e. towards higher latitudes and higher altitudes in the mountains, but this migration process will face two main limitations: on the one hand, the presence of geographical barriers –crops, roads, cities that block its advance by hindering the spread of seeds¬–, and on the other, the speed of current climate change, which has a faster rate of variation than in previous periods and which may be higher than the speed of migration of species. These circumstances increase the danger of extinction of species.

Yes, at a speed that is hardly noticeable to humans, but they do migrate. As temperatures rise, Mediterranean species will decrease in numbers at the warmer limit of their distribution and increase in proliferation at the cooler limit, which will have become progressively more favourable, resulting in a migration of the forest.

Which species will be most affected?

Small and medium-sized shrub species, such as thyme, rosemary and rockroses, have a characteristic called summer senescence. These are plants that can lose their leaves when it is very hot to avoid transpiration and withstand high temperatures when there is hardly any water on the ground. These species have more options to withstand climate change. Tree species that are more adapted to drought, such as Aleppo pines and holm oaks, could also gain area. However, those that require a little more cold and humidity, such as Pinus uncinataand Pinus pinaster, oaks and Spanish firs, will have a more difficult time. These may fare particularly badly, because when they can no further migrate they will find that the habitat is no longer suitable for their survival and they will probably face local extinctions.

Do you focus your research on the survival of the Mediterranean forest in the face of climate change?

I particularly study the effects of extreme weather events, occasions when the climate is very different from historical averages. I work on events that have already happened and may be a foretaste of what is to come. When we talk about facing temperatures two degrees higher than today in the future, we are talking about the annual average. However, there have been specific moments in the past when we have experienced these 2 degrees higher temperatures. I study what happened to the plants at the times when this has happened on a one-off basis.

The last event I have studied took place in the 2013-2014 hydrological year in the Region of Murcia; during this period, the average annual rainfall in the Region was about 150 l/m2, roughly 50% of the historical average. Some areas accrued rainfall as low as 60 l/m2, which are almost typical desert rainfall levels. Studying how plants respond in such extreme cases helps us to understand what will happen in the future. Sometimes these episodes are so extreme that we could not even study them considering future predictions of averages.

How did this year of extreme drought affect Mediterranean forest species?

I have studied its effect on Aleppo pines and scrub species. In the case of Aleppo pines, there were mortality patterns of twenty percent in the forests of the Region of Murcia. And in the case of scrubland, which as I have already mentioned is made up of species highly adapted to drought, there were also massive mortality events, with rates of up to fifty percent (some 6000 dead plants out of 12 000 sampled). This reflects that despite being drought-adapted species, they are also vulnerable to extreme events of this magnitude.

Does the scenario point to the forest disappearing?

Studies suggest that in these very arid areas there will be transitions from forest to scrub and from scrub to sparse vegetation (plant formations with very small plants), which would increase the risk of desertification, with all the ecological implications that this entails.