The life of the last sperm whales in the Mediterranean Sea 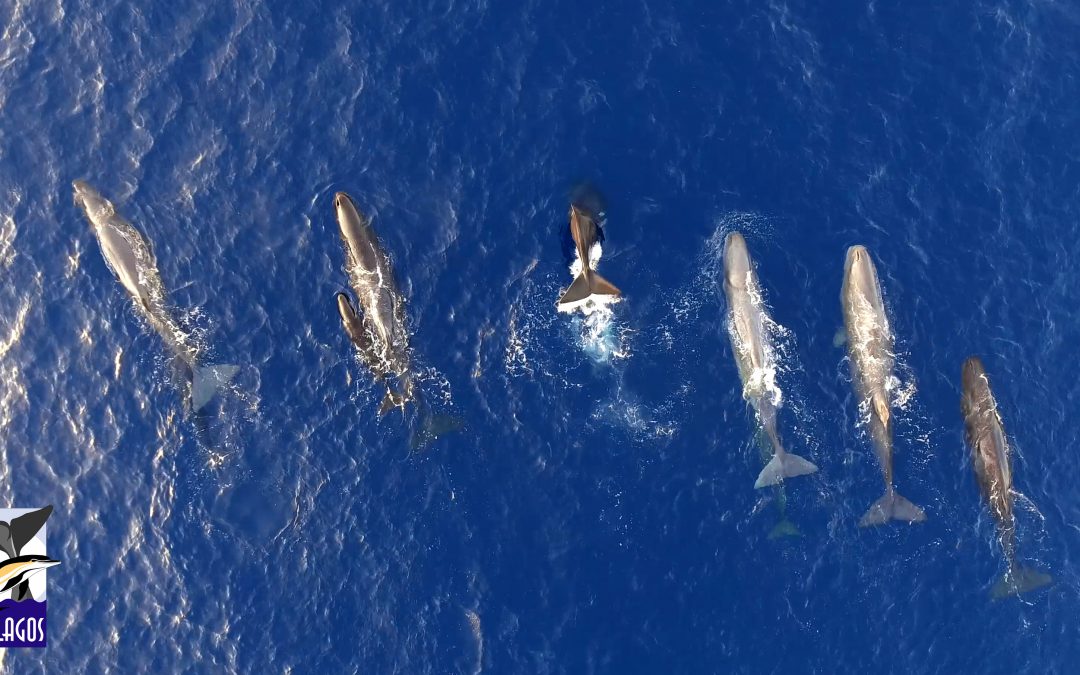 The Mediterranean sperm whales are Endangered by human activities. Only about 200 sperm whales live in the eastern Mediterranean. The Pelagos Cetacean Research Institute, based in Greece, is studying them the last 25 years and knows most of them as persons, thanks to photo-identification methods that make each whale distinct and unique. Together with their offspring the female sperm whales form large families (social units) that move together.

The majority of them live along the Hellenic Trench, Greece, an IMMA at global scale. As this video shows, they have their daily lives with social incidents that sometimes look like our own.

After many cycles of deep feeding dives of about 40 minutes, the entire family meets at surface to socialize and for calves to be lactated. The most amazing among the behaviours shown in this video is the tail-slapping of a presumably immature male whale that approached a mature female, but was rejected and pushed away. The unhappy whale is expressing its discontent with seven tail-slaps! We hope that humans will allow these whales to keep having their own social lives in the years to come.

They are our giant peaceful neighbours just a few miles off the coasts of Greece.

The Pelagos Cetacean Research Institute is a scientific non-profit organisation aiming to the study and conservation of cetaceans. Cetaceans include whales, dolphins, porpoises and a few more related species.

Using science as a tool, the Institute is constantly expanding the limits of knowledge about cetaceans in the Greek Seas and the Mediterranean. This knowledge is then spread to the society and used as a base start for conservation efforts focused on cetacean species populations.

Last but not least, the most significant scientific contribution of the Pelagos Cetacean Research Institute for the Mediterranean region is that the Greek Seas exhibit a remarkable biodiversity in their cetacean fauna.

The importance of this fauna for the both the marine environment and the society makes its conservation an immediate priority. However, the threats to the cetacean populations and their environment are manifold (decrease in fish stocks, chemical pollution, competition with fishermen and intentional killing, noise pollution, drowning in fish nets, disturbance to name a few) and keep increasing in number and intensity.

As a consequence, some cetacean populations are drastically decreasing the last decades and start facing their extinction.

The danger of plastics:

Pelagos Cetacean Research Institute primarily focuses on the research and the production of the necessary knowledge (otherwise unavailable) using scientific methods and tools, and in parallel contributes in the information and awareness of the public through participation of ecovolunteers in scientific and training programs. In this systematic and serious way, it strives for the conservation of one of the most important constituents of the natural and cultural heritage of Greece and of all the Mediterranean region.

They conducted a research on the effect of plastics on the cetacean population; Ingestion of macroplastics by odontocetes of the Greek Seas, Eastern Mediterranean: Often deadly! By Paraskevi Alexiadou , Ilias Foskolos and Alexandros Frantzis

The following are some of the conclusions of the study:

At least half the cetacean species regularly found in Greece ingest macroplastics.

60% of sperm whales in the Greek seas have macroplastics in their stomach.

Macroplastic ingestion by odontocetes can be often lethal due to gastric blockage.

Plastic pollution is an omnipresent problem that threatens marine animals through ingestion and entanglement. Marine mammals are no exception to this rule but their interaction with plastic remains understudied in the Mediterranean Sea.

The research highlight this problem by analyzing the stomach contents of 34 individuals from seven odontocete species stranded in Greece.

Gastric blockage from plastic was presumably lethal in three cases, with plastic bags being the most common finding (46%). Plastic ingestion is of particular conservation concern for the endangered Mediterranean sperm whales. A regular examination of stranded cetaceans with a standardised protocol is critical for allowing spatiotemporal comparisons within and across species.

Plastic is the most commonly observed debris type (46%) ingested by cetaceans with most reported cases involving large items of plastics (> 5 mm) which are collectively known as macroplastics (sensu lato, Baulch and Perry, 2014). The ingestion of microplastics (1–5 mm in size) has been only recently highlighted in cetaceans. Mechanistic explanations behind the ingestion of macroplastics remain to a large degree hypothetical. Ingestion may be: (intentional when cetaceans mistake plastic items such as bags for prey species during playful and inquisitive behaviours or due to foraging inexperience of juveniles; or accidental when plastic is close to the prey target (Walker and Coe, 1990). Risk factors that have been proposed to increase the likelihood of plastic ingestion by cetaceans are poor body condition and deepdiving behaviour (Puig-Lozano et al., 2018).

Aerial photograph showing the total amount of debris found in the stomach content of the young sperm whale laid on a tennis court. The first and last authors of the paper.

This study has shown via stomach content analysis that plastic is ingested by at least half the cetacean species that regularly occur in the Greek Seas with sometimes lethal consequences, such as in the three cases of excessive plastic ingestion.

We showed that among the odontocetes examined, plastic pollution can be a serious threat for sperm whales which are already in great risk due to ship strikes and noise pollution from oil and gas exploration.

While current data are not sufficient to evaluate the threat posed by plastic to harbour porpoises – another endangered populatio -, their small population size in the northern Aegean Sea makes them susceptible to the sub-lethal and lethal effects of plastic ingestion.

To properly assess this problem, a regular analytical approach with a standardised methodology is needed to allow for comparisons over space, time and different species.