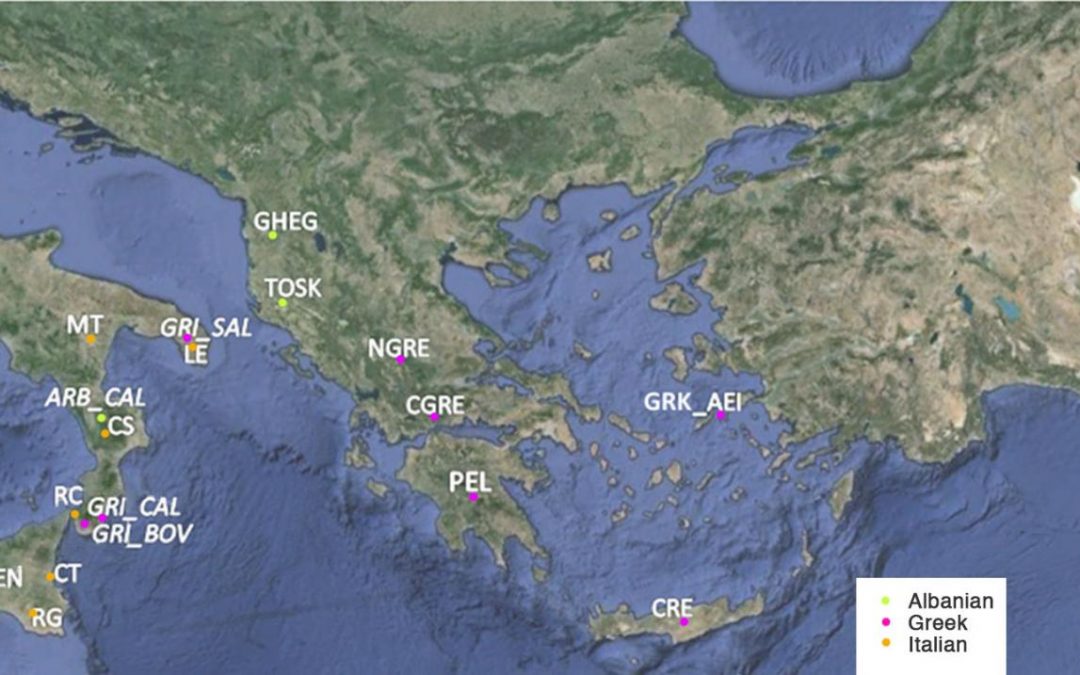 A new genomic study on southern Mediterranean reveals a genetic continuity across geographic and national borders. The map shows the sampling locations included in the study, with presence of Albanian, Greek or Italian languages.

The Mediterranean Sea has represented one of the most important crossroads in human history, acting both as a barrier and a bridge between three continents and multiple human groups characterized by different genetic and cultural backgrounds.

Despite this complex history and despite modern national borders, there is a shared Mediterranean genetic continuity, extending from Sicily to Cyprus, where the populations of certain Greek-speaking islands appear genetically closer to Southern Italian populations than to populations from continental Greece.

This is a central finding of a study published in Scientific Reports, co-authored by Chiara Barbieri, researcher from the Max Planck Institute for the Science of Human History in Jena, coordinated by the Human Biodiversity and Population Genomics group at the Department of Biological, Geological and Environmental Sciences (BiGeA) of the University of Bologna, and funded by the National Geographic Society.

The study describes the genetic fingerprints of the Mediterranean people with high-density genomic markers and a wide sample of modern populations from Sicily and Southern Italy.

Their genetic profiles were analyzed to reconstruct the combination of ancestry components and the demographic history of the region. As one would expect, populations inhabiting the southeastern shores of Europe are the result of a complex, multi-layered history. One of these layers corresponds to a shared genetic background, extending from Sicily to Cyprus and involving Crete, the Aegean islands and Anatolia.

“This shared Mediterranean ancestry possibly traces back to prehistoric times, as the result of multiple migration waves, with peaks during the Neolithic and the Bronze Age,” says Stefania Sarno, researcher from the University of Bologna and lead author of the study. Apparently, the ancient Greek expansions (during the Magna Graecia foundation) were only one of the last events in a long history of East-West movements, where the Mediterranean Sea served as a preferential crossroads for the circulation of genes and cultures.

A new perspective for the diffusion of Indo-European languages

One of the most intriguing layers hidden in the Mediterranean genetic landscape involves an important Bronze Age contribution from a Caucasus (or Caucasus-like) source, accompanied by the virtual absence of the typical “Pontic-Caspian” genetic component from the Asian steppe.

The latter is a very characteristic genetic signal well represented in North-Central and Eastern Europe, which previous studies associated with the introduction of Indo-European languages to the continent. “These new genomic results from the Mediterranean open a new chapter for the study of the prehistoric movements behind the diffusion of the most represented language family in Europe. The spread of these languages in the Southern regions, where Indo-European languages like Italian, Greek and Albanian are spoken nowadays, cannot be explained with the major contribution from the steppe alone,” adds Chiara Barbieri from the Max Planck Institute for the Science of Human History in Jena.

The statues of the Bronzi di Riace (Riace’s warriors) from the 5th century BC, found in the province of Reggio Calabria, became one of the symbols of the Greek presence in Southern Italy. (Museo nazionale della Magna Grecia, Reggio Calabria). Credit: Public Domain

The current genetic study also focuses on more recent historical layers that contributed to the present-day genetic makeup of the populations sampled, in particular in the cases of long-standing, non-Italian-speaking communities in Italy.

For example, mainland Greece and Albania seem to have acquired additional genetic contributions during historic times, most likely related to the Slavic migrations in the Balkans. This recent Balkan genetic ancestry is still evident in some ethno-linguistic minorities of Sicily and Southern Italy, such as the Albanian-speaking Arbereshe.

The Arbreshe migrated from Albania to Italy at the end of the Middle Ages and experienced geographic and cultural isolation, which played a part in their distinctive genetic composition. A different case study is that of Greek-speaking communities from Southern Italy.

The genetic features of these groups are compatible with the antiquity of their settlement and with a high cultural permeability with neighboring populations, combined with drift and effects of geographic isolation, as in the case of Calabrian Greeks. “The study of linguistic and cultural isolates in Italy proved to be important to understand our history and our demography,” says Alessio Boattini, geneticist and anthropologist from the University of Bologna. “The cases of the Albanian- and Greek-speaking communities of Southern Italy help to shed light into the formation of these cultural and linguistic identities.”

The origin of the Indo-European coincides with the Anatolian hypothesis according to quantitative lexical reconstructions. Credit: Bouckaert et al. DOI: 10.1126/science.342.6165.1446-a Science

“Overall, the study illustrates how both genetic and cultural viewpoints can inform our knowledge of the complex dynamics behind the formation of our Mediterranean heritage, especially in contexts of extensive – both geographically and temporally – admixture,” says Davide Pettener, professor of Anthropology from the University of Bologna. “These results,” adds Prof. Donata Luiselli, who co-led the project, “will be further developed in future studies integrating data from other disciplines, in particular linguistics, archeology and palaeogenomics, with the study of ancient DNA from archaeological remains.”