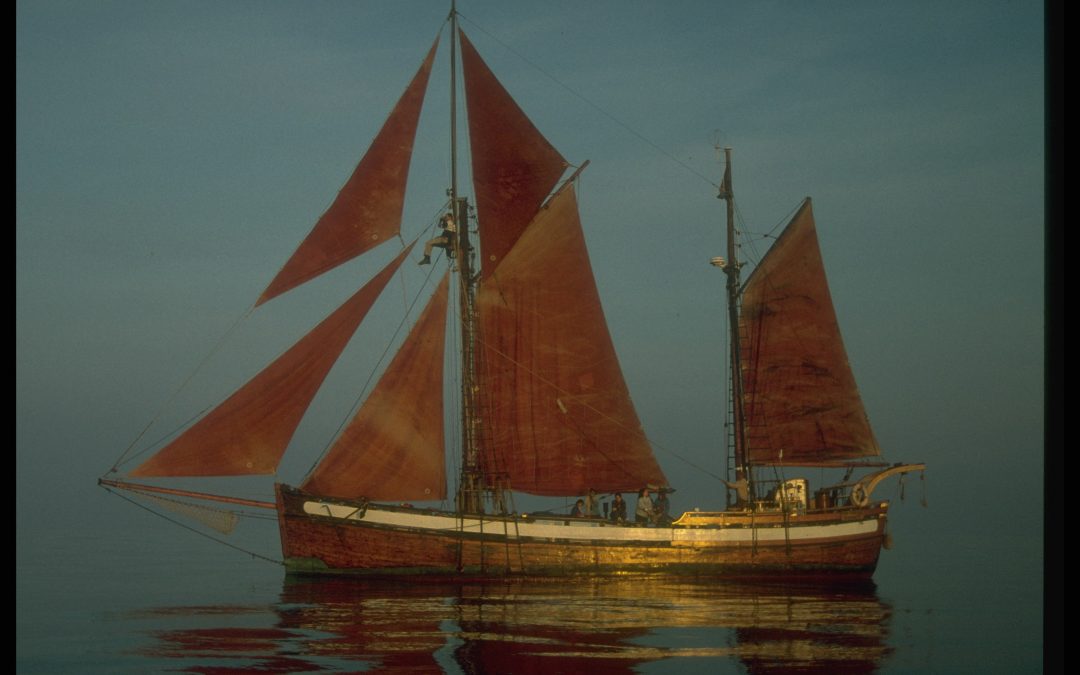 The century-old research vessel Toftevaag calls at Mediterranean ports under the MEDNIGHT flag. And you can visit it.

The Toftevaag is a historical Norwegian fishing vessel that for 32 years has been dedicated to research for the conservation of turtles, whales and dolphins in the Mediterranean. Furthermore, the Toftevaag is also tracking illegal mesh nets, dubbed “walls of death”, in an unrelenting campaign against illegal fishing with drift nets.

Since 2016, it has also been one of the partner ships of the LIBERA Project, a network that unites society to tackle the problem of basuraleza (trash in nature).

This year, the Toftevaag also carries the MEDNIGHT banner with a common project that aims to effectively impress to the public the most compelling problems of the Mediterranean Sea and to highlight the strenous efforts that scientists are making to find solutions to them.

Throughout July, along the victualling stopovers between scientific expeditions, the Toftevaag is opening its doors to the public, becoming a classroom of the sea and a travelling exhibition.

Ports where visiting the Toftevaag will be possible throughout June and July (dates are subject to change depending on sailing conditions) are:

19th and 20th of June. Melilla*… (depends on the political situation)

(Should you visit the Toftevaag, send us your photo with the MEDNIGHT flag and we will upload it to our social media.)

Toftevaag’s captain, Ricardo Sagarminaga, has been working these last 39 years for the conservation of the sea, and especially sea turtles. He will be sharing his fortunes and misfortunes every week on the MEDNIGHT website, in a video blog that is already active (link to the video).

The Toftevaag was built in 1910 on the small island of Halsnöy in Hardanger Fjord (Norway). Its first mission was to fish for herring in the North Atlantic, sailing with the herring fleet between the Shetland Islands, Faroe Islands and Iceland. On board the Toftevaag were only three fishermen, manoeuvring the sails and nets in the icy and dangerous waters for two to three weeks’ tides.

During World War II, the Toftevaag was used by the Nazis to ferry pilots to an airfield at the North Cape (Nordkapp). Old nautical charts bearing the seal of the Third Reich are still preserved on board.

The name of this old Norwegian fishing boat means “meeting place”, and that is what it is, since 32 years ago two former Greenpeace activists restored it for a new mission as Alnitak’s research vessel for the conservation of the Mediterranean.

Since then, the ship has been showing a travelling exhibition on board called Todos por la Mar (All for the Sea), supported since 2016 by the LIBERA Project in its fight against basuraleza (trash in nature).

The main achievements of the scientific work on board the Toftevaag have been the creation of 14 Marine Protected Areas (MPAs), the reconfiguration of maritime traffic in the Alboran Sea and the Strait of Gibraltar, the development of turtle bycatch mitigation measures in the swordfish longline fishery and the involvement of the fisheries sector in marine biodiversity conservation strategies.

Currently, with support from the National Oceanic and Atmospheric Administration (NOAA) and the U.S. Fish and Wildlife Service (USFWS), Toftevaag is carrying out the Wildlife Without Borders mission. Its scientific groundwork is based on satellite tracking of turtles on their migrations, monitoring data on how they are affected by temperature and their habits on the move, and the effect of unfortunate collisions with boats or falling into fishing traps.

The most internationally renowned scientific institutions have collaborated in the Toftevaag’s research campaigns, such as the Earthwatch Institute, Woods Hole Oceanographic Institution, Duke University Marine Lab, SOCIB, Hopkins Marine Station (Stanford University), NOAA, CMRE (NATO), SMRU (University of St Andrews), etc. It has also been the filming location for some significant documentaries for the BBC, National Geographic, ARTE TV and Thalassa, among others.

This summer we will keep you posted via the MEDNIGHT website about the work, efforts, and results of the research that will be carried out in the Toftevaag.