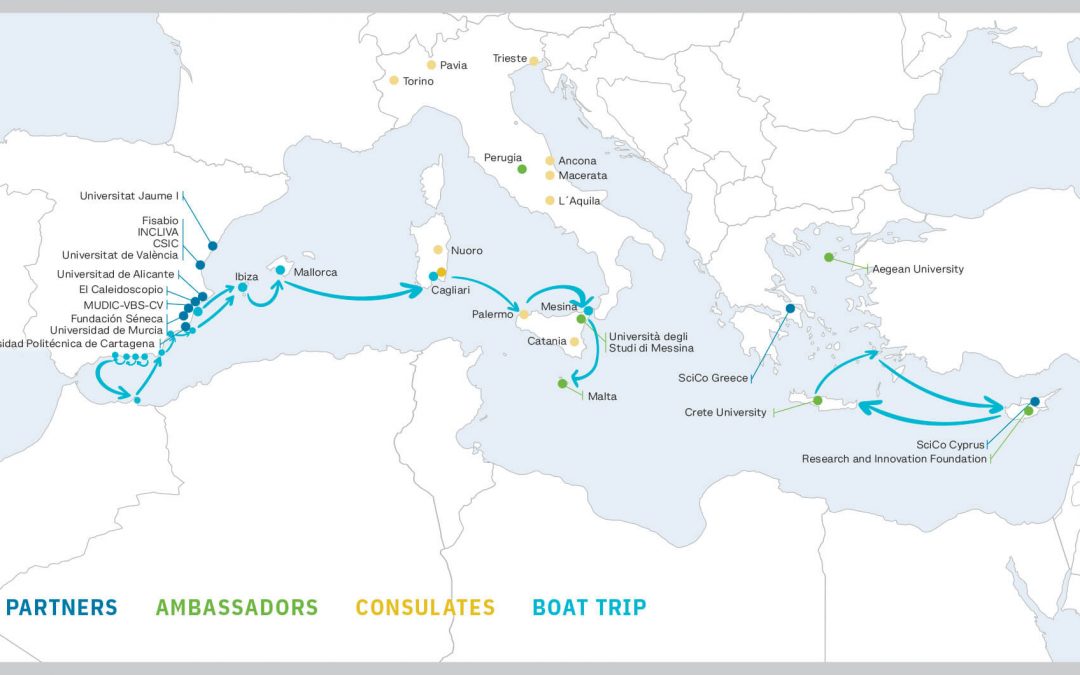 MEDNIGHT 2021 is comprised of a consortium of 13 entities in Spain (Comunitat Valenciana and the Murcia Region), Greece and Cyprus. The consortium has obtained funding thanks to the EU’s 1st Horizon 2020 Research and Innovation program within the framework of the Marie Skłodowska-Curie grant agreement.

MEDNIGHT 2021 will be held on September 24, 2021, and for the first time, various Mediterranean countries will come together in a science-related event under a common flag.

The aim is to show the public the importance of science and research that is carried out in Mediterranean countries—emphasizing the role of women in this field—with the intention of tackling the problems shared by Mediterranean society.

The MEDNIGHT 2021 activities, events and experiences will revolve around the following topics: Climate and Clean Energies, Sea and Contamination, Geology and Biodiversity, Diet and Nutrition, Life and Health, Anthropology and History, Pioneering Scientists and the Future.

All of them are aligned with the objectives of the Green Deal, given that this year the European Researchers’ Night is dedicated to the European Green Deal.

Within this context, MEDNIGHT 2021 will address the effects of climate change and the degradation of the environment as a threat to the countries connected to the Mediterranean Sea: one of the most important geopolitical places in history, one of the most desired by the global tourism industry and the most contaminated on the planet.

The project will be launched on June 3 from the Greek island of Lemnos, kicking off the first of over 300 activities that will occur between June and September.

The closing ceremony will take place in Alicante, at the Casa Mediterráneo, an organization under Spain’s Ministry of Foreign Affairs, on September 24 and will coincide with the Researchers’ Nights in another 370 cities throughout Europe.

Within the framework of the European Researchers’ Night

MEDNIGHT 2021 will be celebrated within the framework of the European Researchers’ Night, a scientific dissemination project promoted and financed by the European Commission as part of the Marie Sklodowska-Curie actions (grant agreement no. 101036107) of the Horizon 2020 program.

The European Commission has dedicated 8 million euros to this call, and bids were submitted for 139 projects (39% more than the previous call). MEDNIGHT 2021 received 397,812 euros of aid for its part.

The initiative seeks to promote scientific careers in Europe. Its main objectives are to bring the figures of researchers closer to the public, so that their work is known, as well as the benefits they provide to society. It is also meant to promote choosing scientific careers among students and to eliminate gender barriers in them.

Each institution of the consortium will carry out its own activities, which together, will give shape to MEDNIGHT 2021. On the night of September 24, the cities of Cartagena, Murcia, Orihuela, Alicante, València, Castelló de la Plana, Messina, Crete, Limnos, Nicosia and Malta will host events with different workshops and activities for scientific outreach. Between June and September, exhibits, guided visits, discussions and challenges related to research intended for different audiences will take place to emphasize the value of Mediterranean science.

MEDNIGHT 2021 has the support and recognition of the prestigious European Women Rectors Association (EWORA).

In addition, town halls of coastal cities will participate, and help carry out the proposed activities. Associations like Karam (Refugee Aid Group), Gised (research and subaquatic sports), Stenella (environmentalism), Save the Med Foundation (marine regeneration of the Mediterranean Sea), and other scientific outreach associations will collaborate with the inclusion of different audiences in the activities.

In addition, MEDNIGHT 2021 will have access to hospitals and residences for the elderly where some activities will be held. These events will always have the necessary protocols, and follow the safety and protection measures for all participants. For its part, EuropeDirect (Murcia Region) is supporting the consortium by implementing EU Corner.

Kamishibai: The art of Storytelling by the High School of Livadochori