Children in Lesvos refugee camp banned from blowing up baloons 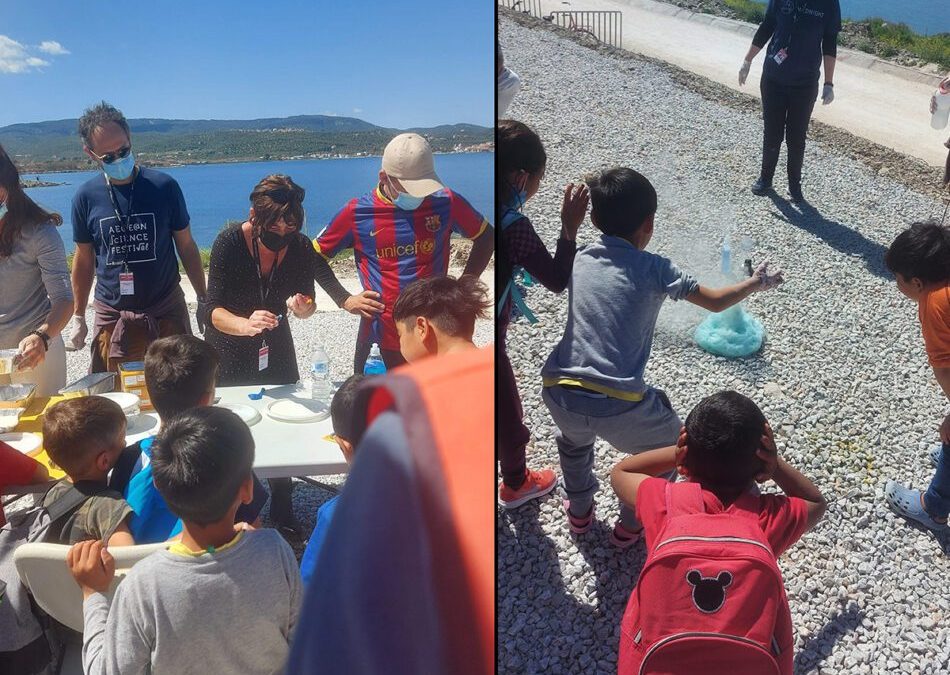 We carried out science experiments for children in the refugee camp on the island of Lesvos, Greece, as a Mednight activity.

Blowing up balloons was part of one of the science experiments we were going to do. It was to prove that a balloon filled with water does not burst if you put a lighter flame underneath it. The experiment is usually done first with a balloon without water, which explodes, of course, by the immutable laws of physics, making an inappropriate noise in one of the most sensitive and critical places in the world. That is why in Kará Tepé, the refugee camp in Lesvos, the first instruction we received was: ” Forbidden anything that explodes”. So we did the experiment only with water balloons, and none of them exploded.

SCIENCE WHERE NOTHING ELSE CAN REACH One of Mednight’s main objectives is to bring science to places where it never reaches, where few things ever do. In the last year, one of Mednight’s activities was a storytelling competition about the Mediterranean. The winning stories were read to children in hospitals, and also in refugee centres in the Murcia area of Spain.

This time, the first encounter of those of us who make Mednight took place on Lesvos, the Greek island next to Turkey much better known for the refugee camp of Moria, which went up in flames a few years ago, than for the birth there of Sappho, the ancient poetess who asked “what is the most beautiful thing to be seen on the face of the earth? The answer is certainly not the Lesvos refugee camp. Moria was the camp with most migrants in the whole of Europe. Although it had a maximum capacity of 3,000 people, approximately 13,000 people were living there at the time of the disaster.

The Moria camp, the hell, was replaced by Kará Tepé, a new refugee camp, guarded by barbed wires, on the edge of the Aegean Sea (in Greek, Αιγαίο Πέλαγος; in Turkish, Ege Denizi), the part of the Mediterranean between Greece and Turkey.

VOLUNTEER TEACHERS IN THE REFUGEE CAMP The NGO EuroRelief offers, among other services, volunteer teachers for non-formal education for children between the ages of 3 and 18. EuroRelief welcomed us to Kará Tepé. As part of one of the educational activities, those of us from Mednight did a science experiment workshop for the children in the camp.

And that is how we were warned that in a refugee camp, nothing could explode.

What happens inside Kará Tepé, or at least what happened on a warm Mediterranean morning, was exciting. About thirty children, mostly Afghans and Syrians, approached the stand of desks where we were going to conduct the experiments.

The desk had the usual science experiment stuff: food colouring, 6% hydrogen peroxide to make a volcano, cornflour to demonstrate the oddities of non-Newtonian fluids, candles and balloons.

As everywhere Mednight has done this activity, the girls and boys got dyed with food colouring, clapped their hands when the volcano came out of the test tube, and got their hands full of flour playing with the weirdness of the non-Newtonian liquid.

It was an extraordinary day for everyone in Kará Tepé. Among the shyest children in the group was Fatima, an Afghan girl, probably aged ten. We kept repeating that everything we do is science. And Fatima asked me: “What is science for? I didn’t really know how to answer her. I have no idea what science can do for a child who has been denied any rights.

Many of these children have lost families along the way. They live in huts where there is no running water. At the door of some houses they use large rubbish bins to collect water. And above all, they are not sure if the prosperous Europe will ever get them out of a limbo of huts and barbed wire on the seashore.

The Greek government was about to close Kará Tepé, but organisations such as Oxfam Intermón and the Greek Refugee Council published a report calling on Athens to reconsider its decision. “It is a camp that offers migrants space to play, entertain and socialise, and this would be stopped abruptly with its closure,” said a spokesperson for Oxfam Intermón Italy. As of today, the camp remains open.

And so, without being clear about the judgement of our activity in a refugee camp, the second year of Mednight began. I would love to know about Fatima in a few years’ time. Maybe she remembers the day someone first told her about science.